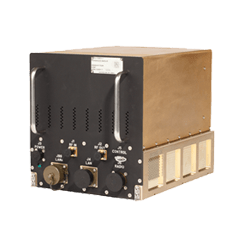 The ICE2004 is an 8-channel RF Interference canceler system that achieves 40 dB of attenuation without the need for cumbersome reference signals from local transmitters. It is a simple two-port RF assembly that covers the 30 to 512 MHz frequency range.  The ICE2004 unit is placed directly between the receiver and its antenna. The ICE2004 enables the reception of low-level RF signals in the presence of up to 8 strong interferers as a result of its inherent low loss path for all non-canceled signals.

The ICE2004 provides fast canceler acquisition and is compatible with SINCGARS and Have Quick hopping waveforms. The canceler system is also designed for minimal harmonics and spurious signals and is MIL-STD-461F compliant. The power is MIL-STD-704F compatible. The unit will mount with standard military trays.

The ICE2004 can auto-tune to on or off board cosite emitters and also support ARC-210 and ARC-231 radio tuning. The canceler system supports IP addressable Ethernet for Built-In-Test (BIT) and system monitoring. 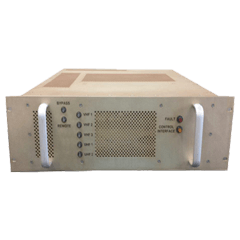 Pole/Zero’s MULTICHANNEL INTERFERENCE CANCELLER (MIC) system is a five channel VHF/UHF Cosite Interference Mitigation System (CIMS) designed to be installed between receivers and antennas with reference signals derived from coupling from offending, cosite emitters. The equipment significantly reduces the undesired RF signals from each associated emitter in order to mitigate against interference to the associated receivers. This is accomplished by injection of accurately scaled anti-phase image of the reference (interfering) signal.

Brought to you by WisdmLabs: Expert WooCommerce Developer